Since the earliest days of the country house, one of their primary roles has been display; conveying meaning through designs, devices and decoration. Through the generations this role remained, though each age had their own influence, mostly evolutionary or occasionally a more dramatic change.  The clearest messages were to be found in the houses which had remained in the family with their collections but as this became a rarer combination in private hands, the National Trust became one of the most important custodians of this legacy. 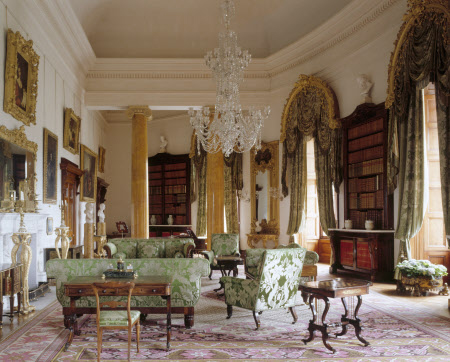 However, in an interview with Dame Helen Ghosh, the Director General of the National Trust, surprised many by saying:

People were also put off because there is “so much stuff” in some of the stately homes. The Trust was now looking at featuring only a handful of interesting artworks in some homes to see if it increased their appeal. Dame Helen said: “We just make people work fantastically hard, and we can make them work much less hard.” [Daily Telegraph – 23/03/15]

Cue much consternation – in his article ‘What’s wrong with the National Trust?‘, eminent art historian Bendor Grosvenor asked ‘Has the National Trust lost interest in art?‘. Mr Grosvenor then visited Ickworth and his follow-up article contained photos of the library, formerly full of contextually appropriate furniture, which now had bean bags.  I shared this via Twitter, prompting a spirited debate which raised the obvious curatorial and aesthetic concerns – who were these visitors who struggled, what about those who visit specifically to see the glorious contents? I confess to being firmly in the latter camp and have stated as much.

In the spirit of an honest debate about this important topic and to put the National Trust’s position, I offered Dr Cowell a guest blog post which he has taken up and is below.

After reading it, I understand why the National Trust feels it has a role to play in developing the interpretation of the country house.  Almost inevitably, these activities are going to be criticised. This is especially true where they conflict with the strongly held views of why most of the National Trust’s members visit these houses, namely, to see their unparalleled collections, married to the interiors for which they were intended.

The controversy is perhaps less about the experimentation and more about the less than transparent way that it has taken place.  One always fears that any action is the thin end of a wedge which permanently compromises what many would accept is the best way of displaying this historic collections. This is unfortunately compounded by Dame Helen’s frustratingly disrespectful description of the matchless art and furniture as mere ‘stuff‘, implying a rather disposable attitude.

Handled differently, I suspect that there would be much less outcry and reputational damage if they were less opaque and perhaps:

I would also suggest that the National Trust facilitated a more formal feedback mechanism so that experts – both internal and external – can debate the merits of the changes along with contributions from their 4m members who care so deeply about the houses.  This would enable a more quantifiable response which could then feed into future proposals. Simply changing things is not sustainable if the National Trust wishes to retain the support and trust of their members and the wider heritage community. 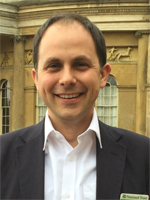 Dr Ben Cowell, Regional Director for the National Trust in the East of England

Valiantly defending the position of the National Trust online is Dr Ben Cowell FSA, Regional Director for the National Trust in the East of England.  Dr Cowell is also Deputy Chairman of The Heritage Alliance. He worked formerly for English Heritage and the Department for Culture, Media and Sport, and has published widely on aspects of history and heritage.

Below is his specially commissioned response to the debate and the controversy, putting the other side to the argument about how the country house can be presented today.

Visitors to Dunham Massey this year, as last, are shown a different version of a house they might know well. The saloon, a masterpiece of Edwardian country house design, has been stripped bare. In place of the fine furniture are metal beds, medical cabinets and hospital screens.

Dunham Massey has been returned to the time when it was Stamford Military Hospital, a place of repair and recuperation for soldiers from the Western front during the First World War. The effect is electrifying. A team of actors has been engaged to re-enact imagined scenes from the lives of those – both soldiers and nurses – who were known to have been at Dunham during this time. The details of their lives have been carefully researched, even if the dramas are fictions, albeit highly engaging ones.

Not everyone has appreciated what the National Trust has done with Dunham Massey during its temporary ‘Sanctuary from the Trenches’ re-fit. But huge numbers have. The property has had its most successful year by far, and recorded levels of visitor satisfaction have rocketed.  People love the sense of connection with lives as they were lived a century ago in the midst of unparalleled global conflict.

Does this inevitably point the way for every National Trust country house? Of course not. Has ‘Sanctuary from the Trenches’ been such a success that we are now wondering where else we might make other temporary, experimental interventions? Of course.  And there is nothing new here, since we have perpetually made changes to the way the rooms of our mansions are shown, whether to draw out a particular theme or highlight a particular age in a house’s history.

The National Trust is committed to offering ‘experiences that move, teach and inspire’ by raising the standard of presentation and interpretation across our historic mansions. That is apparent from our recent strategy document, Playing Our Part.  There is no single policy or approach. Curatorial decisions are made in situ, respecting the genius loci.  The curatorial eye needs to be constantly on the move, seeking out new ways to display or experience things, in order to delight or otherwise engage visitors. 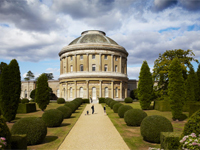 Two examples from my patch exemplify this. At Ickworth, following the highly successful recreation of the basement rooms, our attention has turned to the grand display rooms above them in the Rotunda. These rooms were conceived by Ickworth’s creator, the 4th Earl Bristol, as a gallery for his impressive collection. In the same spirit of wanting to show off the artworks to best effect, we are trying out some new approaches, confined to just a few rooms on the ground floor.

In the Library we’ve temporarily left the room bare (following cleaning work on the electrolier chandelier) in order to focus attention on the pictures and the chandelier itself.

Informal seating has been provided in order better to allow visitors the chance to stop and pause. When the project is complete (we’re only part way through the re-presentation at present), lighting elsewhere in the Rotunda will be enhanced, allowing works such as Titian’s portrait of an unknown man to be seen wholly afresh.

Up at Felbrigg, on the North Norfolk coast, another experiment is about to begin. Here, the grounds of the house are the venue for Wolf’s Child, part of this year’s Norfolk and Norwich Festival. Wolf’s Child is a perambulatory work of drama, experienced at nightfall. Visitors will move on a pre-determined walk through the woods. The story is drawn from Ovid; the tales explore all manner of human-animal transformations. 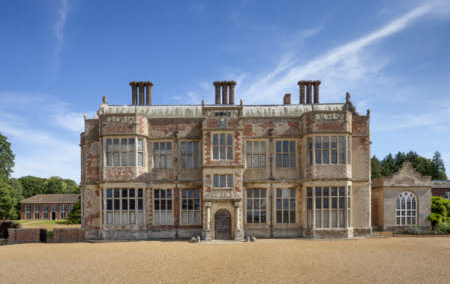 Is this the ‘right’ way to experience the Felbrigg landscape? Ought we not to have moved a single piece of furniture in the Earl Bishop’s palace? There are those who are steadfastly certain of the answers to these questions. I am not one of them. All I know is that there can be no progress in the field of country house interpretation unless we are open-minded to the possibility of experiment.

We must do so in a way that is respectful of the spirit of the place, and we must never make permanent changes that would damage the inheritance that we hold in trust. We will make mistakes from time to time, and will be rightly chided for them. But to not explore different ways of seeing is surely to blinker us to the possibility of greater glories.

I very much thank Dr Cowell for his contribution to the debate and hope that it has helped provide an alternative viewpoint.  Comments can be left below but please remain respectful and on-topic.  The views expressed in the introduction are mine alone and have not been vetted or approved by the National Trust.

An amateur architectural historian with a particular love of UK country houses in all their many varied and beautiful forms.
View all posts by Matthew Beckett - The Country Seat →
This entry was posted in News and tagged dr ben cowell, dunham massey, felbrigg hall, ickworth house, national trust. Bookmark the permalink.