Rothschild-shire: the wider fate of UK country houses mirrored in a family (1/3)

The landscape of the UK is one rich in our heritage of country houses.  Each tells a tale of wealth, ambition and family life, yet, although each was built as a home, for many of them this is no longer the case.  These houses can be grouped in many ways – by architect, region, style, size, etc – but there are very few that can be grouped together simply by family ownership.  To acquire one country house is a mark of achievement, yet for an elite group of families, their success allowed them to amass a collection of houses.  The Rothschilds were one such family and so effectively did they colonise an area of Buckinghamshire that it became known as ‘Rothschild-shire’.  In this two-part article, we can look at the fortunes of their houses, and in them, see a snapshot of the fates of country houses across the country. This first part features Gunnersbury Park, Tring Park, Champneys and Halton House.

The Rothschilds are one of the most successful family businesses in the world; financiers to companies, countries and the considerably wealthy.  Having become well-established in Frankfurt, the five sons of Mayer Amschel Rothschild set out for five European cities – London, Paris, Frankfurt, Naples and Vienna – in 1809-10 to expand the firm.  By working closely together they flourished, creating a pan-European network which not only handled money but also information, making them the best informed and giving them a competitive advantage.  Their business achievements naturally made the family exceptionally wealthy and, as was the pattern, their success translated into property, with the family building over 40 houses in the 19th and early 20th centuries across Europe.

In the UK, the Rothschilds waited until 1835 before acquiring their first country house, Gunnersbury Park, Middlesex. The estate had been home to Princess Amelia, daughter of George II, in the first Gunnersbury Park, designed by John Webb but inspired by Palladio’s Villa Badoer.  After Amelia’s death in 1786, the house and estate were eventually bought by a speculator who demolished the house and sold the land in 13 lots. All bar two were bought by Alexander Copeland (10 lots in 1802 and a further 2 in 1806), business partner to the architect Henry Holland, who probably designed it.  Unfortunately, the remaining two lots sold were immediately to the side of the new house and a second mansion was built, leading to the houses being imaginatively labelled the Small Mansion and Large Mansion.  It was the latter which was bought by Nathan Meyer Rothschild, only a year before he died in July 1836.  The house then passed down the Rothschilds until 1925 when Maria, recently widowed wife of Nathan’s grandson, Leopold de Rothschild, decided to sell the house and now 200-acre estate to Ealing and Action Borough Councils for just £130,000, for use as a public park – far less than if sold for development.  Despite some local resistance, the park opened to great acclaim with the Large Mansion now the Gunnersbury Park Museum.

Although Gunnersbury Park was a country house, Nathan Mayer Rothschild had also rented Tring Park, Hertfordshire from 1838 as a more rural retreat. When the owners decided to sell, it was purchased with 3,643-acres (14.74 km sq) by Lionel Rothschild,  (b. 1808 – d.1879), Nathan’s eldest son, in May 1872 for £230,000.  He promptly gave it to his son Nathaniel Mayer Rothschild (Baron Rothschild from 1885), as a belated wedding present.  The house is notable as one of the very few designed by Sir Christopher Wren and was built in c.1680 though later remodelled in 1786 by Sir Drummond Smith and again between 1874-78 by Lord Rothschild, who inserted a third story, added a new Smoking Room extension (which replaced the original conservatory and orangery) and generally gave a ‘French’ air to the house, under the plans of the architect George Devey (b.1820 – d.1886).

It was Lord Rothschild’s son, Walter (later 2nd Lord Rothschild), who perhaps made Tring Park notable through his obsession with natural history, and specifically, zoology.  The Rothschilds have often fallen into preferring either ‘arts/sciences’ or ‘business’ and Walter was the former.  Over the course of his life, he amassed one of the greatest natural history collections in the world; a vast array of specimens (including 2.5m butterflies – all mounted) which became the Walter Rothschild Zoological Museum, and which was eventually donated to the British Museum in 1937.  Walter’s inability to manage his finances – mainly through overspending on the museum – meant that although he inherited the title, the house and estate went to his brother, but only after the death of his mother, who Walter continued to live with at Tring until her death in 1935.  Walter died in 1937 and his nephew decided to break up the estate, but kept the house, which was used by the family bank in WWII to store documents.  After the war, Lord Rothschild decided not to live at Tring and so sold it to become a performing arts school.  Though the landscape remains, in 1975 in a particularly crass act of planning vandalism, the A41 Tring Bypass was built straight through the parkland, splitting it in two. 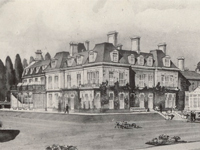 Another house related to Tring Park, though never a main family seat, was Champneys, in Wigginton, which served as the dower house for the main estate.  This sizeable house had originally been built in 1874 in a French Second Empire style by Arthur Sutton Valpy, before being bought by Walter Rothschild’s parents in 1902.  However, Walter’s mother, Emma Louise von Rothschild (b.1844 – d.1935), realising that her son wouldn’t marry, sold the house in 1925 to Stanley Lief, who created his first ‘Nature Cure Resort’, forming a brand which is still well known for its spas today.

Lionel Rothschild had also bought the Halton estate from Sir George Henry Dashwood in 1853, further extending the Rothschild domain in the Aylesbury Vale.  The first house on the estate was a smaller, Palladian affair which had latterly been little used by the Dashwoods and fell into decay. The remnants of the house were finally demolished in early 1880 after Alfred Charles (b.1842 – d.1918), middle son of Lionel, inherited the 1,400-acre Halton estate in 1879.  Over his lifetime he expanded the estate until it covered around 3,250-acres – but any aspiring landed gent requires a fine house as well as land; and the wealthy, educated Alfred was determined to live up to the family tradition.

Halton House, Buckinghamshire – detail of photo taken in 1921 (Image: Britain from Above / English Heritage) Click to see the RAF camp in the background.

A site for the new Halton House was swiftly chosen and work started in 1880.  The architect is not confirmed but Mark Girouard believes it to have been William R. Rogers, the design partner of  the builders, William Cubitt & Co. As was popular with the Rothschilds, Alfred decided that his house would be another in the French chateau-style – though perhaps more rigorously closer to the originals but with his own special additions, including a spectacular winter garden.  The house was completed by July 1883, Alfred having employed a veritable army of labour to ensure swift progress, but the final interior fittings took another year. No expense was spared to ensure visitors impressed by the grand exterior could only be equally dazzled by the interior; every room a lavish statement of his wealth and fine taste, silk wallpaper, embellished by his superb art collection – every detail thought of, even down to the door knobs emblazoned with the Rothschild family crest.

Reaction was mixed to this luxurious new home, exemplified by Algernon West who described it as “an exaggerated nightmare of gorgeousness and senseless and ill-applied magnificence” but who later admitted that “lighted up and full of well-dressed people, it appeared quite tolerable“.  Even his nephew Lionel de Rothschild described it as ‘looking like a huge wedding cake‘. Most of the objections appeared to sniff more at the lavish expense than real architectural criticism.  Mark Girouard, writing in 1979, was far more generous, describing it as ‘splendidly Louise Seize with another sumptuous winter garden…a tour de force of Rothschild extravagance‘.

Sadly, this was a house built for the age of grand entertaining, one which WWI ended.  Alfred was deeply patriotic and having frequently used his political connections in the service of the government, wanted to help further.  He offered the Halton estate to his friend Lord Kitchener and so the house became first an infantry camp, then for the engineers, then, once created, the Royal Air Force.  With the house shuttered and neglected, the gardens and house declined, mirroring Alfred’s own failing health.  After his death in 1918, the house was inherited by his nephew, Lionel, as “he was the only Rothschild without a country house” but he didn’t like it and so sold it to the RAF for a bargain £112,000. They quickly expanded the facilities and, in 1919, Halton House became the Officers’ Mess of RAF Halton; a role it still performs today.

Outcome: house and estate taken over for military use

Part 2 of this article will appear soon…

Other links of interest:

An amateur architectural historian with a particular love of UK country houses in all their many varied and beautiful forms.
View all posts by Matthew Beckett - The Country Seat →
This entry was posted in News and tagged buckinghamshire, champneys, gunnersbury park, halton house, rothchildshire, rothschild family, tring park. Bookmark the permalink.

8 Responses to Rothschild-shire: the wider fate of UK country houses mirrored in a family (1/3)