HS2 Northern Extensions, Part 2 – Birmingham to Manchester: a delicate dance with one mis-step

Posted on February 4, 2013 by Matthew Beckett - The Country Seat

Having looked at the impact on country houses of the first branch of the next phase of the HS2 line between Birmingham and Leeds (‘HS2 Northern Extensions, Part 1 – Birmingham to Leeds: good for some, bad for others‘) it’s clear that the damaging heritage choices which marred the plans for the first phase between London and Birmingham have been largely avoided.  Can this new spirit be successfully continued as the line tries to find a path to Manchester through a landscape shaped by the many country houses in the area? 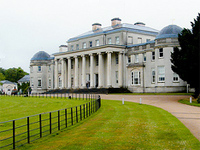 The line emerges from the urban sprawl of Birmingham and swings past Lichfield into the Staffordshire countryside, equidistant between the rivers Trent and Blithe, well to the west of the remains of Hamstall Hall with its beautifully weathered gateway, and Blithfield Hall, which now sits next to the Blithfield reservoir. It also sweeps past well to the north of the first of the great estates on the route, the grand Shugborough Park. The core of the house was built in 1693, but the house house seen today was largely the creation of the architect Thomas Wright, between 1745-48, followed in 1794, by Samuel Wyatt who added the dramatic, ten-column portico. Across the river, the splendid Tixall Gatehouse (to the demolished, later Tixall Hall) also can continue in its peaceful repose. 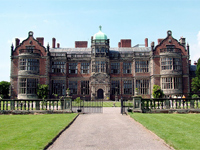 Sadly, a poor route decision follows immediately after, with the line cutting within 400 metres to the south-west [PDF] of the grand front of Ingestre Hall (historical details here).  A former home of the Earls of Shrewsbury, the house is a wonderful example of the Jacobean tradition, that short period which developed the drama of the Elizabethan house with classical principles, combining architectural flamboyance with symmetry.  Although Ingestre is no longer a home, and the park a golf course, the embankments of the HS2 line may not be enough to mitigate a serious incursion into the environs of this house. 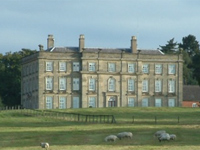 The route continues to the north of Swynnerton, placing the village between the trains and the beautiful seat of Lord Stafford, Swynnerton Hall, which still sits in a 3,000-acre estate. After Newcastle-under-Lyme, the line passes to the east of Doddington Hall, still the seat of the old Staffordshire family, the Broughton-Delves.  The route continues northward, neatly bisecting Winsford and Middlewich, passing to the east of the impressive but now hugely over-developed Bostock Hall with its housing estate at the back. 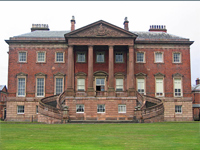 As HS2 heads into Cheshire, the delicate dance to avoid the grand houses and their estates requires some deft footwork. Knutsford is surrounded by important houses but importantly, for us, the line passes west of the beautiful Tabley Hall and estate, which was so atmospherically painted by J.M.W. Turner (the painting can be seen at Petworth in Sussex).  One of the finest examples of the work of John Carr, the house replaced Tabley Old Hall which remained on the estate and was incorporated as an eye-catcher in the landscape as a picturesque ruin.  Also untroubled is Viscount Ashbrook’s family seat of Arley Hall, also well to the west of the line.  Similarly, the ever-grand Tatton Park, once seat of the Egerton family, now owned by the National Trust, and its thousand acres of parkland are kept well clear of the line. 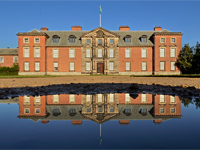 Past Knutsford and heading towards Altrincham, the line splits with one branch curving gently west away from another National Trust property, Dunham Massey. Following this line, heading north of Lowton, the attractive small family home of the Byrom family, Byrom Hall, built in 1713, loses its rural outlook and will instead be at the edge of a rolling stock maintenance depot at the end of that line.  The other branch heads south of Altrincham and heads towards Manchester, skirting the edge of the city but by now the semi-urban fringe is no longer the setting for country retreats and so the line passes into the city without any further threats.

So again, the route of HS2 from Birmingham has avoided many of the pitfalls of the first phase and has mostly been able to step lightly around the historic estates which have brought such beauty to our landscapes.  However, the one mis-step is around Ingestre Hall, where the line will create a dramatic slash through the parkland and perhaps impinge on the future ability of the house to be rescued from its current use as an arts centre and golf course to one day become a home again.  This is unlikely if the economics of conversion and restoration are upset by the overall value of the house and estate being seriously compromised by HS2.  With farmland to the south, it would make sense to move the route just another couple of hundred metres to ensure tranquillity for this fine house.  Overall though, the planners at Arup and Mott Macdonald ought to be congratulated on plotting a sensitive course through a difficult landscape and one hopes that the final plan maintains this.

3 Responses to HS2 Northern Extensions, Part 2 – Birmingham to Manchester: a delicate dance with one mis-step