Posted on December 26, 2009 by Matthew Beckett - The Country Seat 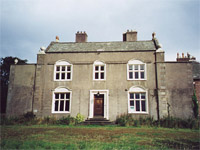 Grade-II* listed Woolsington Hall, set in 340 acres of fine parkland, was bought in 1994 by Sir John Hall, who had successfully turned Wynyard Hall into a palatial hotel.  Though on a much smaller scale, Woolsington was to also be converted into a small, luxury hotel at a cost of £8m – 10m.  However, after several years of inaction, its deteriorating condition led to it being placed on the English Heritage ‘buildings-at-risk’ register in 2002. Despite work in 2008 to make the building watertight and in prepartation of the main conversion, work has been halted again.  Sir John insists the money is still available but that he is so busy with his many other ventures that he is unable to commit to it at the moment.

Though this is somewhat understandable in the current economic climate, as a Grade-II* listed building it must not be forgotten and allowed to decay again.  The building remains on the English Heritage register but hopefully work will start again to rescue this charming smaller country house in 2010 and bring it back to life.

An amateur architectural historian with a particular love of UK country houses in all their many varied and beautiful forms.
View all posts by Matthew Beckett - The Country Seat →
This entry was posted in At Risk, News and tagged At Risk, buildings at risk, conservation, country house, development, english heritage, grade-ii, listed, northumberland, restoration, woolsington hall. Bookmark the permalink.