Posted on June 7, 2011 by Matthew Beckett - The Country Seat 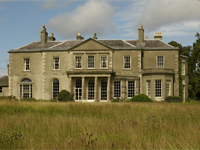 One of the great glories of the private incomes afforded to previous generations was the ability to indulge in their passions.  Given the opportunity, many of us would similarly be happy to devote our lives to our interests and, for some, in doing so they have created great collections – not just of art, but in the fields of anthropology, Egyptology, armour, botany…the range is endless.  In this week’s ‘The Country House Revealed‘, Dan Cruickshank visits Clandeboye in County Down, Northern Ireland; seat of a branch of the Guinness family, but also home to an impressive collection of artefacts.

Clandeboye (also sometimes known by the original name Ballyleidy) sits in a 2,000-acre estate in the heart of the Ulster countryside – a smart, elegantly Georgian seat; the design semi-Soanian (originally), part-the-owner (later additions).  The professional architect involved was a former pupil of Sir John Soane, Robert Woodgate, to whose designs the house was built in 1801-4.  Woodgate had a brief career, cut short by his early death in 1805, having joined Soane’s practice as an apprentice in 1788, before graduating in 1791 and then being sent to Ireland to Baronscourt, Co. Tyrone (note the triffid-like march of the wind turbines now marring the skyline!), to supervise the building Soane’s commission of a new house for the Marquess of Abercorn.

Clandeboye, for the 2nd Baron Dufferin, was one of Woodgate’s earliest commissions and is unusual, ignoring the more common ‘Palladian’ central block with flanking wings layout, of houses at the time.  At Clandeboye, whilst still Soanian in it’s style, the layout is focussed on two wings at right-angles to each other with the corner due south taking maximum advantage of both the setting and the sun.  All-in-all, a good, competent design by a well-trained young architect – though perhaps lacking some of the drama a more experienced architect might have brought to the plan.

What is particularly special about Clandeboye today is that it contains the remarkable and diverse collections of the wonderfully named Frederick Temple Hamilton-Temple-Blackwood, 5th Baron Dufferin and Claneboye (note the different spelling of the title).  A prominent politician and administrator, he served as Governor General of Canada  (1872-1879) and Viceroy of India (1884-1888).  The Lord Dufferin was also something of a radical social reformer and fell out with the PM, Gladstone, believing that the land ought to be owned by the farmers.  Not content with just arguing for this, he sold off much of the 18,000-acres the family had amassed, leaving the estate we see today.

Very well-educated, Lord Dufferin, as with many other wealthy Victorians, used the opportunities of his many diplomatic postings to acquire large quantities of objects – not just the usual art and furniture but curiosities from around the globe.  This led to a new programme of work in the mid-19th century to enlarge the house to display these prizes, resulting in a large west wing.  Dufferin had toyed for years with grand plans for the complete rebuilding of Clandeboye to a faux-Elizabethan nostalgic ideal.  After a few years, his tastes changed and he then sought out Benjamin Ferrey to provide a French-chateaux style house – but again this came to nothing.  In 1865, his preferences had ebbed back towards a more ‘romantic’ style and he began a long collaboration with William Henry Lynn, who then advised Dufferin on the alterations to Clandeboye which are what we see today.   One aspect of the process which probably infuriated Lynn was, as Harold Nicolson has described, that Lord Dufferin’s ‘passion for glass roofing was… uncontrolled‘, leading to the broad use of skylights.  Considering how Soane, and therefore probably Woodgate, sought to carefully manage the effects of light, this crude flooding of the interior spaces may not have met with approval from the original architect.

Today, the contents of the house can be seen as a snapshot of the passions and interests of a wealthy aristocrat at the height of the British Empire. Victorian Britain seemed to foment this type of collector with other houses similarly becoming self-indulgent museums – though often with a great intellectual rigour which helped drive forward our understanding of the world and science. 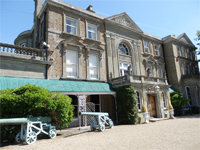 For example, Quex Park in Kent became the showcase of the Powell-Cotton family, who, over six generations, created a superb collection of natural history with specimens taken during Major Percy Horace Gordon Powell-Cotton’s expeditions to Africa,which has subsequently been expanded by later generations.  Another showcase was Goodrich Court (dem. 1950) which was designed by the owner Sir Samuel Rush Meyrick specifically to accommodate his world-renowned collection of arms and armour which forms an important part of the incredible Wallace Collection in London. 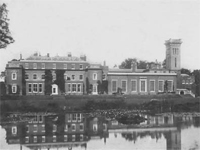 As at Clandeboye, Egypt has long held a fascination in Britain.  One early and noted collection was assembled by William Amherst Tyssen-Amherst (the 1st Baron Amherst) at Didlington Hall in Norfolk (dem. 1950/52).  By chance, Lord Amherst employed a Mr Samuel Carter, a well-known artist to paint at the house, and he would often bring his son, who spent many an hour in the extensive Egyptian museum in the house.  That son was Howard Carter who famously went on to discover Tutankhamun’s Mask with George Herbert, 5th Earl of Carnarvon.  Highclere Castle also holds a small but important collection of Egyptian antiquities amassed by the 5th Earl and which are now on display in a purpose-built gallery in the cellars of the house. 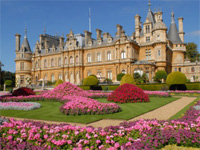 Perhaps the greatest example of a house built to show a collection is Wadddesdon Manor in Buckinghamshire; that slice of French architecture which enchantingly appears in the middle of the English countryside.  Funded by the vast Rothschild fortunes, the mansion, designed by Gabriel Hippolyte Destailleur, was built between 1874-1889 for Baron Ferdinand de Rothschild primarily to showcase what must easily be one of the finest collections of Dutch and English paintings and French art, tapestries and furniture.  Used only in the summer months for parties and entertaining this was the ultimate expression of the desire to use a private residence as a gallery – or was it merely a gallery with bedrooms?

So Clandeboye is part of a long and fine tradition of the wealthy owners of large houses not merely adding a scattering of objet d’art to show-off the taste of their interior decorators. These houses are true collections, in some cases museums, even monuments, to the eclectic passions of their owners.  The wide-ranging nature of these collections demonstrates one of the many benefits of single family ownership, such as at Clandeboye, where intellect and wealth can be combined over generations to create a rich and interesting tapestry that no public organisation would be likely to be imitate; and our nation would be all the poorer without it.

A wonderful interview (and slideshow) with the Countess of Dufferin and Ava: ‘The Marchioness‘ [wmagazine]

4 Responses to The Country House Revealed – Clandeboye, County Down