How did Bessingham Manor get into this state? 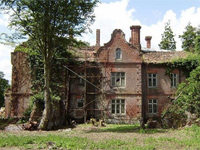 Norfolk has suffered the loss of many of it’s larger country houses but the smaller houses often not only survived but were much cherished as manageable but beautiful examples of local architecture.  Yet, even today it’s possible for one of these lovely red-brick homes to slip into dereliction, at risk from the weather and criminals; Bessingham Manor has become another of these sad examples.

Built in 1870 for the Spurrell family, who had farming connections in Suffolk going back over 500 years, the house originally had 52-acres but this has now been reduced to a more manageable five.  The house remained in the Spurrell family until the last member died in 1952.  It was then bought by Robert Gamble who eventually found maintenance a significant challenge which was compounded by a poor quality roof repair which failed leading to massive water damage to part of the house, including the collapse of sections of the second floor.  The near derelict state of the interior is mirrored in the exterior which is partially supported by scaffolding or probably held together by the extensive ivy.  Perhaps questions should be asked as to why this gradual decay was not spotted by the local conservation department who may have been able to force repairs before the damage became so extensive?

It was in this sorry state that the house was finally put up for auction in September 2009 with the agents, William H Brown, who optimistically thought it might go for around £900,000 – despite a likely £1m bill to fully restore the house.  Unsurprisingly, it failed to reach even the reserve of £640,000 from a starting price of £400,000.  To compound the problems, thieves also broke in and stole a fireplace from one of the ground floor rooms.  Despite this the agents have continued to try to find a buyer but with only limited success.

By the beginning of 2010, there were three offers on the table.  Two were from individuals looking to create family homes but worryingly, one of the offers still in the table was from a developer looking for a commercial project – which is probably an inappropriate enabling development.  With all the wealth still available and our nation’s ostensible love of older buildings, it is sad and mystifying as to it’s been so difficult to find a sympathetic owner.   Once restored the house would probably be worth several million – so if someone has approximately £1.5m needing a profitable use then this would be the ideal opportunity; just please do it sensitively.

Despite the initially pessimistic outlook and the subsequent challenges, Bessingham Manor has survived, and more than that, is nearing completion of the restoration – see this comment left on another Country Seat article by William Hickey. This shows that the analysis of developers should often be taken with a measure of scepticism, especially where heritage assets are involved.  The rescue/restoration of Bessingham Manor is to welcomed and the owners congratulated for their success.

An amateur architectural historian with a particular love of UK country houses in all their many varied and beautiful forms.
View all posts by Matthew Beckett - The Country Seat →
This entry was posted in At Risk, Comment, for sale, News and tagged architecture, At Risk, bessingham manor, buildings at risk, conservation, country house, development, english heritage, for sale, heritage, houses, listed, norfolk, restoration. Bookmark the permalink.

36 Responses to How did Bessingham Manor get into this state?