Posted on April 7, 2010 by Matthew Beckett - The Country Seat 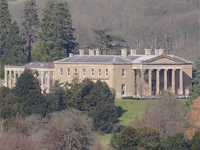 The great wealth generated by the Victorians led to the creation of some of our grandest country houses.  Designed to impress guests and provide a showcase for the collections and taste of the owners, these houses were remarkable and beautiful expressions of the power and preferences of the age.  However, in the more straitened circumstances of the 20th-century, this left owners with running costs which far outstripped their wealth and which unfortunately led to hundreds of our country houses being demolished.

Some escaped the wreckers pickaxe through conversion into apartments – but this doesn’t always solve the questions about the long term sustainability of a house, as shown by the visit of the TV programme Country House Rescue to Whitbourne Hall in Herefordshire.

The grade-II* listed house was built for vinegar magnate Edward Bickerton Evans whose father founded the Hill Evans Vinegar works in Worcester in 1830, which was, by 1905, the biggest vinegar producer in the world.  As was standard practice for the discerning Victorian millionaire he decided to build a grand country house and chose a cornfield in Whitbourne as the perfect location.

Despite its Georgian appearance, it was built between 1860 and 1862 to a design by Edmund Wallace Elmslie and inspired by the Erectheum on the Acropolis in Greece. The house was a lavish example of neo-Palladian architecture with a six-column portico, whilst on the south front a huge orangery, now known as the palm house, was added in 1875 and was thought to be the tallest in Europe.  The interior features a fine pillared main Hall with a rare blue and white glass ceiling, and the main reception rooms retain many original features.  At it’s height in 1876, the estate extended to over 2,500 acres with the classically beautiful Whitbourne Hall sitting proudly at the centre.

Remarkably, the Hall remained in the Evans family until 1980, when it was purchased by Whitbourne Hall Community Ltd to be run as a communal housing project with individual apartments and set in eight acres of gardens.  This original arrangement floundered and a commercial company was created to run the house as a more conventional managed community of 23 apartments.  The main rooms have been preserved much as they were with the Morning and Drawing Rooms retaining their original wall coverings.  However the sheer scale of the house means that the average annual maintenance bill is about £42,000 – and due to extensive and significant work required to maintain a house of this quality, that bill is expected to double in 2011, posing serious problems for the residents.  Extensive restoration is now required as the house is now suffering from a catalogue of issues including failing plasterwork as water penetrates through the coffered ceiling of the main hall.    Curiously Whitbourne Hall doesn’t seem to be on the English Heritage Buildings at Risk Register – it would be interesting to know why not.

One of the perennial difficulties of owning a country house is not just the huge costs such as heating but also the ongoing maintenance (as demonstrated by the Earl Spencer’s sale), the costs of which, rise significantly the higher the classification.   With the paucity of public grants for maintenance it falls to the owners to seek innovative ways to make these wonderful houses financially self-sufficient if possible.  However, as Country House Rescue often shows, it’s the owners who can sometimes be the problem who need to be convinced before they become part of the solution.