After the fire, the difficult choices: Raasay House, Scotland 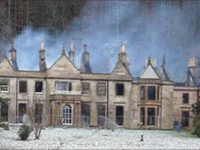 When Raasay House on the Isle of Skye Raasay was largely destroyed by a huge fire in January 2009 just days before it was due to reopen following a £4m refurbishment, the locals and owners vowed to quickly rebuild the house as it was.  Fire has always been one of the major threats to our country houses and when it strikes the responses to the destruction can vary greatly – particularly in the modern era.

For many country house owners in the 16th-19th-centuries immediate rebuilding was the favoured response if funds allowed – either to re-create the original house or sometimes to build an entirely new one.  Raasay House was built in 1746 for the clan Macleod after the previous house, built in the 1500s, was deliberately burnt down in 1745 in the wave of retribution which followed the Battle of Culloden.  The house, extended in the 1870s, was run as an outdoor pursuits centre and was an important part of the economy on the Isle of Skye Raasay.  This meant the response was largely on the basis of local economics which required the house to be rebuild to support the business, apparently not for its intrinsic architectural value.  However, the Scottish grade-A listing (equivalent to the English grade-I) means that the ‘new’ Raasay will be a faithful recreation of the original house as it was before the fire.

Although country house owners have long rebuilt, the principle that the house will be strictly rebuilt exactly as it was is, in some ways, a modern response as heritage legislation requires full salvage of any architectural fragments with the presumption of restoration.  Insurance companies also pay out for recreation of the old building, not the construction of a new one.  So responses now are sometimes based on the architectural or heritage value, and sometimes due to the constraints placed on the owners.  The wishes of the owners also play an important part with some looking to recreate whilst others follow the principles of the Society for the Protection of Ancient Buildings who state:

Although no building can withstand decay, neglect and depredation entirely, neither can aesthetic judgement nor archaeological proof justify the reproduction of worn or missing parts. Only as a practical expedient on a small scale can a case for restoration be argued.

The 1992 fire at Windsor Castle destroyed large sections of the State Apartments including the Crimson and Green Drawing Rooms, the Queen’s Private Chapel and St George’s Hall.  It was quickly decided by the Restoration Committee (headed by Prince Philip) that many of the rooms would be restored to as close as possible their original state with only a few modern rooms and the Queen’s Private Chapel to be restored in a modern style.

However, no lesser organisation than the National Trust also has firmly followed the faithful re-creation approach, particularly following the devastating 1989 fire at Uppark, Sussex.  Although the dramatic pictures of the fire would suggest total loss, brave efforts by staff saved the majority of the contents of the house and the fire was found to have only destroyed the attic and first floors whilst severely damaging the ground floor.  It was then announced by Martin Sekers, the National Trust’s Regional Director for the Southern Region, that “We feel that enough survives to justify total restoration.”.  So how much has to survive to warrant re-creation?  A spirited public debate at the time brought forward opposing views such as that expressed by the respected architecture critic Deyan Sudjic who argued in an article in the Sunday Correspondent (17 Sept 1989) that:

“…it won’t actually be Uppark no matter how skilful the work of the 20th Century craftsman who seek to recreate it. What tourists come to see will, in fact, be a replica, one which could be said to diminish those fragments which actually are authentic…”

However, other eminent architectural historians such as Dan Cruikshank came out strongly in favour of recreation principally from the point that it provided the opportunity to re-learn old techniques and provide a model in their use.  Andor Gomme argued that a recreated Uppark would be the only appropriate way to show the rescued contents in an appropriate setting.  Gomme also highlighted that in previous cases where a house owned by the National Trust had burnt down (the incomparable Coleshill, Berkshire in 1953 and Dunsland House, Devon in 1967) the decision at the time to demolish what remained was later deeply regretted.

So for public organisations the clear preference is strongly in favour of re-creation despite the claims of the modernist and the SPAB that such an approach is to miss an opportunity or is simply fake.  Yet, for private country house owners, their long-held preference has been to simply restore as much as possible – even if just the walls were left standing.

When Knepp Castle, Sussex was gutted by fire in 1904, work started in 1905 to recreate John Nash’s original design.  Similarly after fires at Bramham Park in 1828, Duncombe Park in 1879, Stourhead in 1902, Monzie Castle in 1903 and Sledmere in 1911, the owners all worked to faithfully recreate the houses to the state as they had been.  For houses such as Lees Court in Kent which was almost completely destroyed in 1911 (scroll to last image) the house was just rebuilt using what remained of the outer walls.

So is restoration the best approach?  Although there is danger that the new work might be a poor pastiche of the earlier work, to just discard what has been salvaged and what remains and to only allow modern work would seem to be overly dogmatic.  However, it will only work if any restoration is of the highest quality to avoid any chance that what is produced is merely a lifeless reproduction.  Owners over the last 400-years when faced with a greater or lesser degree of loss have often sought to restore and to continue that tradition today is to draw on a much longer history than to rely only on the intellectual restrictions of the later purists.

7 Responses to After the fire, the difficult choices: Raasay House, Scotland